2 Chainz dropped his anticipated album, Pretty Girls Like Trap Music last week, and I’ve given it a pretty thorough listen. My initial thought? Well, pretty girls do indeed like trap music, but we already knew that. The album overall has “trap” beats; heavy guitar, loud bass, and simplistic eight count raps. Simply put, it’s an album you can listen to when you just want to zone, without having to think too deeply about the lyrics. That is not to say there is no depth to the Chainz album. Tracks like “Poor Fool” and “Burglar Bars” remind us that Chainz is not your run of the mill rapper–he is layered.

The album has a good lineup of features: Nicki Minaj, Drake, Monica, Quavo, Gucci Mane, Travis Scott, Swae Lee, Ty Dolla $ign, Trey Songz, Pharrell Williams, and Migos. With the exclusion of Nicki Minaj, everyone did a good job. I really just want Nicki to realize she took an L from Remy Ma and quit responding.

Big Boi (of Outkast) also dropped an album last week, BOOMIVERSE. Do I really need to tell you all that this was the best hip-hop album of the bunch? The only negative thing I have to say about Big Boi’s album is that I miss the intellect of Andre 3000. Once you move beyond that and accept that Big Boi is going to give you the genius of the streets, this is an album that can be really appreciated in this era of mumble rap and subpar bars.

Young Thung dropped Beautiful Thugger Girls and I’m not going to pretend I can write an unbiased review here…it’s TRASH! This may seem harsh, except his album actually gave me a headache. This album does not deserve a Snoop Dogg feature. 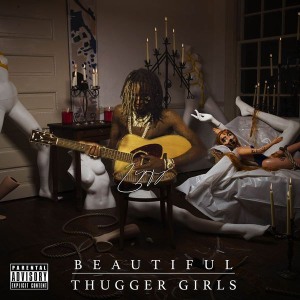 H.E.R. also released H.E.R. Volume 2 recently. It begins melodic and essentially stays there the entire time. Sonically, the album sounds good but she needs at least one feature. Her voice is somewhat monotone and eventually drones.

Vic Mensa released his ep, The Manuscript and it’s well worth the listen. It’s full of snarky punch lines that are diverse, confident, and full of societal and social awareness. Outside of my two obvious biases: he’s from Chicago and easy to look at, the tracks are solid and what you would desire from a quality ep. The beats are hard, the songs are varied, and the bars hit. He once said, “this ain’t conscious rap, this is ignorance.” He’s actually both, and I love him for that. Anytime you can speak to my lower and higher self on the same album I’m content. The duality reminds me of home. I actually wish this were a full album. I can stand to hear more.

My best friend would massacre me if I didn’t include the anticipated SZA album, Ctrl. I try to avoid hearing anything about an album before I listen to it, to draw my own conclusion, but it was impossible with this album–everyone is talking about it! The only worthwhile question is does it live up to all of the hype? Arguably. I definitely think that it’s a solid project and demonstrates a nice variety, but I don’t feel like I need to hear any songs on the album, and sometimes I find myself wishing the tracks were instrumentals. She’s definitely talented, but her octave is sometimes a little too high pitched and scratchy and ruins the melody. She also makes me want to play Bryson Tiller, but only TRAPSOUL. However, I can appreciate that she’s singing from a perspective of desire and honesty that isn’t always attributed to women.

One of my favorite albums to drop this year is actually My Moment by Tee Grizzley. The album is surprisingly soulful, even the acapella intro. What draws me most into the album is the raw honesty. A lot of the times its honest encouragement of violence and misogyny, but I can acknowledge that it’s problematic and still enjoy hearing it. This is what I imagined Pretty Girls Like Trap Music would be, but perhaps this is considered gangsta rap and not trap? Either way, I rock with this album. It really is the conviction behind the bars–the emotions are palpable. If the events aren’t real he’s one hell of an actor.

Finally, I finally have my #Summer2017 anthem: